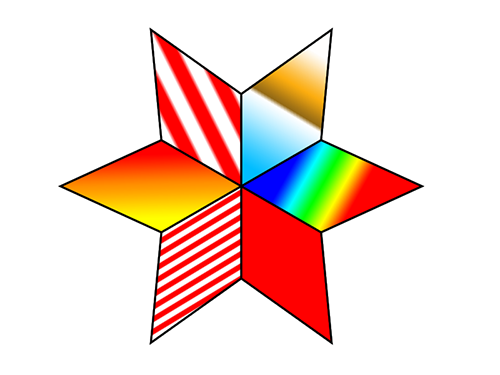 The update this week mostly focuses on gradients and patterns

Each enclosed path in a compound shape can now have its own gradient, pattern, or color. Each path can also have it’s own material transform. Material transforms are used to control how gradients and patterns are rendered. What used to require multiple shapes on different layers can now be accomplished with just one shape.

This was a bug I’ve known about for a long time. In previous versions if you turn off the stroke and look at the border where two adjacent shapes meet you’ll see a slight halo of whatever is underneath. I thought this would be much harder to fix, but luckily the creator of Antigrain, the library I’ve used as the basis for my own graphics library already solved for this with their compound rasterizer so it was just a matter of implementing it. Now there are no seams and one shape blends perfectly into the next.

I’ve added support for gradients and patterns to be added to palettes. This also means that the gradient and pattern editors now show the minipalettes for selecting presets. I’ve added a couple default patterns though many more will be added in the future.