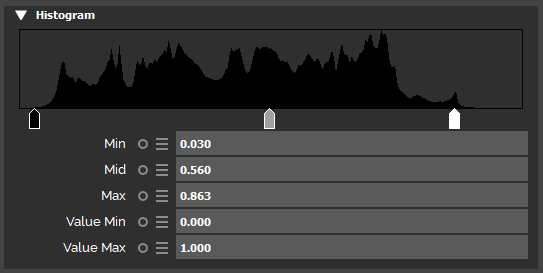 The update this week appears lightweight but there are several things that have been done behind the scenes. I’ve started using the Boost Generic Image Library (GIL) to work with raster data on the back end. The goal is to make it easier to work with different formats of raster data though for the foreseeable future Exothermic will stick with 8 bit RGBA simply because it’s easiest and I’m only one guy.

This node shows the distribution of luminance values within a raster. It also allows you to adjust the levels. The values can be adjusted through the traditional parameter fields which allow keyframing, or by interacting with controls on the histogram itself.

This is a node I’ve wanted for a while but creating it was harder than it looks, plus it’s still a work in progress. Currently it only creates basic inner bevels but that will be expanded on in the future. I’m also looking to address the quality and speed of the effect.

A note on performance

Currently the raster nodes are single threaded so performance is not great. I fully intend to multithread where possible in the future. Right now I’m just trying to create the basics. Also keep in mind that Exothermic is not intended for working with large raster files, there are numerous photo editing tools already on the market that can handle those tasks.